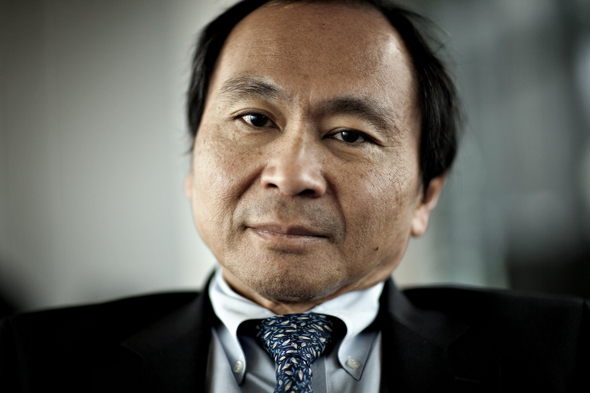 – Today Ukraine celebrates the 25th anniversary of its independence. How can You evaluate its progress toward a democratic and lawful society over this period, especially after the Euromaidan revolution?

– If you compare Ukraine to Russia it is really a free society. There is free press and political competition. It is not consumed with the nationalist hysteria the way Russia is. But I think it also has a lot of distance to go in terms of building modern democratic institutions, particularly in terms of the rule of law and having a modern state. In the past the whole Ukrainian system was controlled by the oligarchs or political leaders who used their position to enrich themselves and extract resources from the state. Under this system ordinary citizens really didn’t have particular power over that wealth. And the big task now, which failed during the Orange revolution, is to build a modern state and to build the rule of law. Since I’ve been here I’ve been impressed that there is feeling, especially on the part of young people, that they really don’t want to repeat mistakes of the Orange revolution. There is also much more attention to the question of corruption and attempts to follow up in building of these institutions.

– In 1990 the “Deutsche Bank” predicted that Ukraine would have the highest development potential among all republics of the former Soviet Union. Why this prediction did not come true?

– I think they were making this prediction on the basis of natural resources and also the fact that it had a well educated population. But they didn’t take into account what was institutions. Because without a secure rule of law, without basic political stability, without a government that can manage economy competently, you would not get economic growth. And I think that what really happened.

– Russian aggression against Ukraine is the most important question on its political agenda. How do You see the future of this war?

– It is hard to make a prediction. It really depends on the calculations that Vladimir Putin makes. I think that the war was launched in order to bolster his domestic position. He became much more popular in Russia after he grabbed Crimea. I think he doesn’t want a democracy on his borders to succeed. He wants his neighboiring countries to be weak and under his control. So, he will do what he can to keep Ukraine weak. But, on the other hand, he can’t be too immersed in his aggression. Russia is already under sanctions from the Europeans and the United States. So, he has to be careful.

– Are sanctions a successful and adequate response to Russian aggression?

– I would prefer if they supplied some military equipment and gave more economic support. But in the absence of that still sanctions are imposed fairly seriously. In certain ways they are more and better targeted than anything that happened during the Cold War. So, they are not meaningless by any sort.

– Corruption is often cited as enemy of Ukraine of no less importance than Putin’s Russia. Do You see a model of fighting the corruption, which can be implemented in our country?

– There is not a single model because there are many different kinds of corruption. They all need to have different approaches. But essentially the most damaging kind of corruption in the United States is at the high level where you have political figures who plot to use their political offices to benefit from state resources. And that is really a political issue. You need to grab power away from these people and put it in the hands of elected representatives who are really representative of a broader public. And you also need courts that are powerful enough and independent of political actors. One of the things that I’ve been impressed with, is that there are a lot of efforts right now on the grassroots level to create more transparency of government using technologies. This is something that starts in many parts of the World on these days, making public procurement more transparent and having the government put more of its records online and, therefore, subjecting to citizens’ scrtutiny.

– Political system in Ukraine is dominated by the oligarchs – the wealthiest people who exert a corrupt influence over it. These people control media and manipulate public opinion, forcing people to vote again and again for their pocket political parties. Do You see a way how to break through this vicious circle and bring to power a responsible political elite?

– There are a couple of counterbalancing forces. One is civil society, which toppled Yanukovych twice in the past 15 years. It’s not that easy to mobilize it, but I think that under right circumstances it could be. There’s also a political pressure from outside – from international institutions, from the United States, from Europe and alike. But I think ultimately it is a political struggle that has to take place within the country for citizens to be able to take back their own property in a certain sense.

– Ukraine has declared European integration the aim of its foreign policy. But there’s a difficult situation now in the European Union itself. Immigration crisis is the most serious problem. How do You see the future of the EU? And how the inner crisis might affect its relationships with Ukraine?

– I think the current situation in the EU is obviously not very optimistic from Ukraine’s standpoint, because the EU expanded too rapidly as it is. They took in countries like Greece, but probably they should not have been taking in way back in the 1970-s. After Britain has voted to leave, the EU is actually getting smaller rather than larger. And therefore they have to be more selective and create a smaller Union out of smaller number of countries. I think for the time being its a good objective for Ukraine to follow, because the goal of joining the EU will prompt it to reform anyhow. But the political likelihood of access is going to be limited for a while.

– Ukrainian society is concerned with recent statements of Donald Trump, who said that he was ready to recognize the Crimea a part of Russia. What changes should we expect in American foreign policy toward Ukraine after the presidential elections?

– I don’t think Trump will be elected. Hillary Clinton will probably be the next president. And if she is elected things will probably be better from Ukraine’s standpoint. Because she is more willing to support traditional American allies and less reluctant to use military power and other forms of leverage. So, she will have a more activist foreign policy than Obama. Obviously, if Trump is elected this would be a disaster both for global economy and for global politics. Because I think he is a fool. He doesn’t know what he is doing. His policy will be extremely destabilizing. But I think the American people are waking up to the fact that this guy is not competent to be president.

– Considering the immigration crisis and support for the far-right parties in Europe, Donald Trump’s statements against the migrants, as well as ongoing islamization and authoritarization in Turkey, can we be witnessing a broad way of anti-democratic regression in the World with growing support of different anti-liberal and anti-democratic political forces and regimes (nationalist, populist, religious fundamentalist etc.)?

– A lot of these events are reflection of greater democracy, but less liberalism. Liberalism is different from democracy. It has to do with maintaining an equality of rights and the rule of law. And democracy oftentimes counters liberalism, because the majority often wants to impose its will on minorities. So in this sense the World is getting more democratic, but less liberal. I think you should be a little more careful to distinguish between these different phenomena. One set of things is going on in the muslim World, and another set of things is going in Europe. It is not necessarily the same set of things. But I do think that, broadly speaking, the globalization over the last 40 years has proceded very rapidly. It is very disorienting and it actually hurts the interests of a lot of people, particularly the traditional working class in developed countries. And what we now see is a backlash against it. You’re seeing it in Brexit, you’re seeing it in populist parties in Europe, and you’re seeing it in Trump’s phenomenon in the United States.

– You suggest that the process of modernization continues for the past 150 years. Is it possible for those countries, which didn’t end being liberal and democratic over this period, to become so in the globalized World, which is more dynamic and unstable?

– I am not sure that I accept the premise that the globalized World is more unstable. One thing that globalization has done it has made everybody richer. Global income has quadrupled since 1970. And in places like India and China hundreds of millions of people who were poor not long ago are now middle class. There has been a lot of growth in Latin America. Ther has been also a lot of growth in Sub-Saharan Africa. So a lot of people are doing much better than they were. And so I think its possible to look narrowly on areas of instability. And if you look on levels of political violence, they are lower today than they were 30 years ago. There are specific things with the rise of radical islam. There is also more terrorism in the Middle East. You have failed states in the Arab world. And you have the threat of populism. But it isn’t strong enough to really undermine democracy in Europe, North America or other areas. So, I don’t think we should over-estimate how bad things are right now.

– Are You still commited to the idea of the “end of history” 24 years after You published Your book?

— If you understand it properly, yes. History is basically the process of development or modernization. And the question is what is in the end of this process. The answer that communists used to give was communism, though it was not achieved. And I was simply arguing that in the end of this process was market economy and liberal democracy. And I think that it is still the case and that it is the highest form of political and economic development. The only real challange to that model is China, which is an authoritarian country that has shown itself capable of broad technological and economic growth. But we will have to see whether that experiment actually remains stable. I have reasons for thinking it won’t.